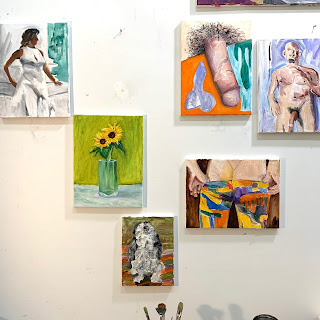 My first exposure to oil paint was at a manikin factory in Long Island city in the summer of 2002. I got a job painting faces on manikins, it was a great job and I really liked it and I learned a lot  but it took me six weeks before I made one they could use but once I got it I got really good.

The way I got the job was in an AOL M4M chat room And I got a message from a guy saying “I see in your profile that you were an artist do you want a job in a manikin factory?” I was working at the Museum of modern Art and I knew that job was going to end soon and I would need another job so I said “sure” his response was “it’s the Drybrush method can you do that?”
I said sure so he gave me an address in Long Island city and told me to show up Monday morning at 7:45 AM it wasn’t a problem because I’m an early riser did though seem a little weird but I should just show up at some factory in Long Island city but it also seemed like something I should pursue so I went there and he gave me a palette with some oil paints on it  and a baby manikin and some brushes and told me to paint. I was pretty nervous and I did a pretty bad job but he looked at it and said I had some talent and I would be able to pick it up. So I went downstairs negotiated my hourly rate,  filled out all the paperwork to join the union and punched the time clock......and  this kind gentle man kept giving me lessons but I wasn’t picking it up,  it was really frustrating I just couldn’t figure out how faces were put together.  Every day on the subway I would stare at people,  look at their faces and  look at all the details how they combined then I get into the manikin factory and I try and replicate what I saw and it was close at times but always a little bit off I remember one time I gave a baby eyebrows that were too big and my boss yelled at me saying the baby looked like Joan Crawford.

I remember the day I finally made one that could use,  once I got it I got it and I kept at it and I became pretty good and as I was doing it I realize like oh I bet I could transfer some of the skills to a canvas and it wasn’t until around 2008 long after I left that job that a friend asked me if I could paint his portrait I said sure, So I my friend sent me a photograph of himself cropped the way he wanted it and I did a pretty good job of painting it but he didn’t like it. My then current boyfriend was traveling a lot to the far east for work and he was away for long stretches of time so I started to make paintings of him and they were pretty good.

An ex-boyfriend‘s dog had recently died and so I painted her and that turned out really good he bought it so I made another painting of her from the same photograph it was different and it was good too.... so I made paintings of myself I had a photograph that I really liked that my friend boyfriend to take care of me and Fire Island and I made a painting of it and really liked it the next day I made another painting from the same photograph and it turned out really different but I liked it to the third day I did the same that one is quite different but I liked it to so I spent the summer Painting Portraits of people and dogs .
I asked a friend of mine who worked at a very nice gallery if you would come over and take a look at them he came down to my basement studio sat down in a chair looked at the wall and said “dogs and men with beards, dogs and men with beards” I didn’t realize my scope was so narrow so I started painting women and babies and I got a few commissions and I kept at it I really enjoyed it but I didn’t exactly figure out how it worked with my previous bodies of work and I kind of bothered me and then I stopped thinking about it and just kept at it..