How Did I get Here? 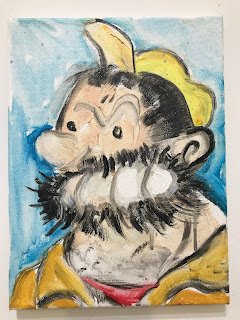 I've always been interested in making records of ethereal experiences. My latest project "2 Years of Bluto" is a record of me learning how to paint  as I was never formally trained and learning how to forgive. The subject matter, Popeye's nemesis, Bluto, is often thought of a "Bad Guy" as was my aggressive, angry and long deceased dad. So spending 2 years painting this cartoon character over and over turned into a way to meditate on my dad’s dual nature as good and bad as well as my own. I learned how to forgive, and that took a big burden off of me and allowed me to believe in my ability to take risks as a painter, to keep pushing, a quality I learned from my Dad. A major element of the Bluto work is forgiveness, another ethereal experience.

My latest project "2 Years of Bluto" at the Marlborough Contemporary NYC February and March of 2019 was my 11th solo show and my 2nd all painting show, In the past two years this obsession with good and bad has been the fuel to hone my talents as a painter and my ability to forgive as a human.

My previous project "2 Years of Looking" was a group show in a london Gallery. I made a list of the most influential conversations I had had with artists over the previous 2 years and asked those on the list to be included in a group show as a record of these conversations, 48 artists contributed 72 artworks to this show.

I had my first solo shows in Minnesota at 20. I photographed suburban houses, like the one I grew up in with multicolored shadow's that I created through gelled lights surrounding them, referencing the invisible acts of love and cruelty that were taking place inside. My first shows in NYC were comprised of photographs of smells and sound and later sculptures based on ethereal events, Then I started drawing spirals while I listened to a song, the song title under the spiral became completed drawings. Then I started dripping plaster while a song played making cavelike sculptures of stalactites and stalagmites as a record of my experience listening. Next I made flowers out of porcelain while listening to music. The resulting flowering branches were a record of listening to an entire album.


My latest project "2 Years of Bluto" at the Marlborough Contemporary NYC February and March of 2019 Is my 11th solo show and my 2nd all painting show, it's taken me a while to learn how to make credible paintings and in the past two years this obsession with good and bad has been the fuel to hone my talents as a painter. and my ability to forgive as a human.
Posted by Erik Hanson at 7:23 AM