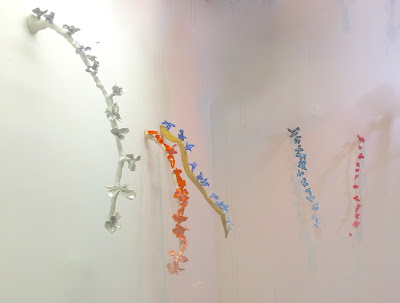 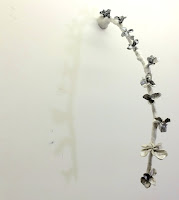 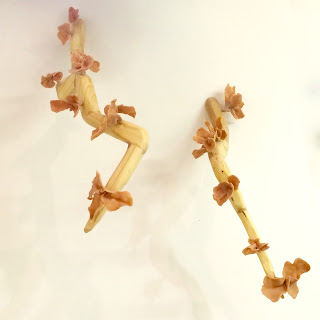 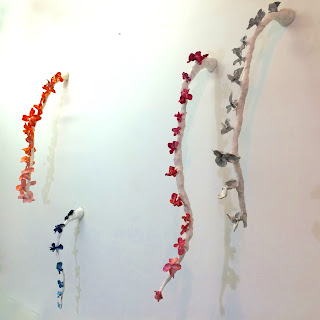 After years of feeling that my dad and I had nothing in common I came across a box of cassette tapes he made for me of the music that he called his own when he was a teen, The swing music which shocked his parents and allowed him to forge his own identity…

He was playing this music up until my last visit with him shortly before he died in 1997.

I've been making flowering branch pieces as a way of meditating on music for number of years. I make each flower for the duration of a song, so each is a record of my listening and each branch contains 6 -12 flowers, usually based on an album. In the last couple of months I started making them out of porcelain .

I’d like to make a roomful of these branches based on cassette tapes that  my dad gave me, of the music of his youth. I envision 24 flowering branches in different colors installed on all four walls of a room.

I love the way that what was once shocking and new becomes comfortable and quaint over time…Impressionism, jazz, swing, rock’n’roll, punk rock...

Much has been written about the importance of each generation’s pop music informing an identity apart from what came before.

….Why is punk rock still fashionable almost 40 years after its birth whereas 40 years after the birth of swing, coincidentally 1977, it was horribly dated, Is punk rock actually out of fashion? Do I just want to think it is because it's the music of my youth....
I’ve been trying to find some commonality with my dad in order to let go of the resentments I’ve been harboring towards him.  I realize now that one of the few places we were able to connect was over music and more specifically  the pop music of our youth. I went to visit him shortly before he passed away in 1997 and we did the usual arguing… him unhappy with my career choice being an artist and letting me know how much he didn't approve of everything about me.The one thing we were able to bond over was music. He was playing a lot of the music of his adolescence ….swing music which I never paid much attention to and he was really enjoying it and I started to realize that for him this was a big part of his identity. For a lot of us adolesence is the first time we are able to be our own person and get out from under our parent’s shadow so to him this music meant a lot ….the fact that his parents didn't like it was  perfect. Just like the music of my adolescence, Punk Rock, this was intended to piss off his parents.

Through my dad I realize the music of his generation played a large role in shaping his identity.  I had the same thing happen to me with punk rock. I loved it because it was my own thing. My older brother and sister didn't get into it and that was great because I finally found an area of pop culture that was my own.

After my last visit with my dad we talked in the phone and I said I liked the music he was playing he said “ I can make you some cassettes” so he put together a  box of cassettes with handwritten notes and put and sent them to me…. I was carrying around so much resentment towards my dad that I never really wanted to play the tapes, then my dad passed away and the box sat there unexplored for 15 years.

I never really played them till it dawned on me this might be the basis of a really good piece that I could make and that it might be a good way for me to make peace with my dad's memory,  to forgive him for his ridiculing my sexuality and career choice. 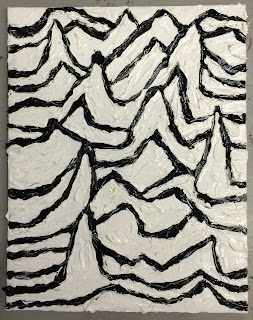 I recently made some work based on the pulsar graphs on the cover of Joy Division’s “Unknown Pleasures” a formative album from my youth, and in the course in my research I learned that the actual graphs that the record cover designer, Peter Saville used were printed by CalComp plotters.  CalComp was the company that my dad was working for when I was a kid in the 60s and we had all kinds of computer graphics framed and hanging on the walls of the house I grew up in.
In the course of making these recent pieces and it caused me to realize some of the good things that I learned from my dad he's incredible computer graphics around the house as a kid and so is a way of continuing this kind of cathartic process I thought the piece about my dad's music would be a good next step.